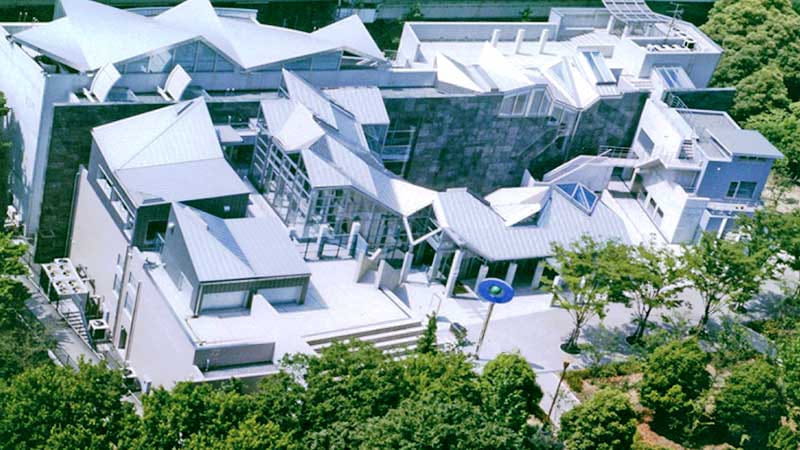 Osaka International Peace Center was built to commemorate the aerial bombardments of Osaka during the second world war.
It is located in one of the corners of the Osaka Castle Park and its purpose is both to grieve and commemorate the civilian victims of the bombardment of Osaka, as well as teaching the value of and praying for peace. The area in which it is built suffered extremely heavy casualties during the air raids, with over 10,000 civilians across more than 50 attacks.
During the final stages of the war, in an effort to cause as much damage as possible the U.S. Air Force attacked ground targets indiscriminately, resulting in an overwhelmingly high civilian death toll whilst burning Osaka to the ground.
The air raids and suffering of Osaka was captured in many works both literary and cinematographic, for example multiple manga works by Osamu Tezuka, light novel “Bonchi” by Toyoko Yamasaki, or “Castle of Sand” by Seicho Matsumoto.
The facility offers more than 30000 books, 1400 videos and 300 DVDs for viewing without charge, plus also guided courses of the area introducing sites of former military installations as well as memorial sites for the civilian casualties. It also cooperates with educational institutions by providing learning materials to schools, teaching new generations about the importance and value of peace.
The rooms on the second floor are decorated with photographs depicting the damage inflicted upon Osaka, especially the popular Minami area and also features everyday items like a water bottle damaged in the air raids. The panels capture the hardships and suffering of the common people and include diaries and letters of conscripted soldiers sent out to the front, draft papers, actual food rations and more.
On the bottom floor you can see a diorama of wartime Osaka as well as screenings of videos featuring war survivors. Third floor is dedicated to Osaka and its leading role in supporting the Japanese economy in the era of rapid technological advancements and economical growth, as well as dedicated spaces for think-tanks regarding world peace in the present day and war torn countries that continue to suffer at present as well.
The walls of the workspace are decorated with peace and anti-war themed posters as well as the symbolic chains of thousand paper cranes “senbazuru”.
Despite its important message and purpose the center is not that well known, however it is a spot that we can very highly recommend for domestic and foreign visitors alike.

Learn about the aerial bombardment of Osaka

The aerial bombardment of Osaka refers to a chain of air raids by the U.S. Airforce near the end of the second world war. As a metropolis Osaka was a preferred target for air raids and as such it ended up in a much worse state than other cities in comparison. Starting on March 13th, the series of air raids continued until August 14th with a total of 8 massive scale aerial assaults. The successive late night raids on March 13th and 14th targeted individual structures, however the massive incendiary bombs caused large-scale fires and in turn extensive damage to the city. When the second wave of planes arrived the city was already engulfed in flames and thus having lost their primary targets the planes dropped bombs on civilian buildings and residences instead. Since the civilian population lost even a safe place to evacuate to, the masses flocked to the major stations like Shinsaibashi and Honmachi in the dead of the night. There the Military Police, train conductors and station attendants decided on their own to save as many people as possible, sending out trains carrying civilians away from burning Osaka. It is hard to fathom the thoughts and feelings of the station staff and train conductors, who broke their regulations and rules, but by doing so saved countless lives. During that raid 4000 people were killed and another 678 were missing. The official explanation for the attack was that the air force targeted a military installation that was believed to be a weapons manufacturing factory for the army.
Seven large scale aerial assaults followed in summer, on June 1st, 7th, 15th, 26th, July 10th and 24th and then finally on August 14th.
The June 7th bombardment was accompanied by strafing, killing 400 civilians taking cover under bridges for safety and many more in and near the evacuation zone of Shirokita Park in the Asahi Ward. A week later a further 477 people were killed during the air raid.
On July 10th the area around Osaka Bay was targeted, burning down large areas in and near Sakai and the Osaka wharf. Approximately 3 square kilometers of land were obliterated in the city of Sakai, killing 1370 civilians in the process. After the nuclear bombing and soviet declaration of war on Japan the government made a move to accept the unconditional surrender as outlined in the Potsdam Declaration, however the American government launched a final air raid on Osaka on August 14th, one day before the capitulation was officially announced. The death toll of this final raid was approximately 700 people, bringing the total to 15000 casualties.

It is not all doom and gloom however, as there are also exhibits depicting the hardiness and hope of the civilians living in those disastrous times.
The center boasts a wide collection of authentic items from that time period, like a 1000 stitch belt, autographed ninomaru flags, draft orders, flags flown during departure for the front line and even an actual bomb. Even though it is dismantled and contains no explosives, the sheer size of it would without a doubt make it lethal if dropped on a person.
During the war there was a weapons manufacture in Osaka that was believed to be the very best in the East Pacific region, its detailed history on display as well. There is also a replica of an authentic air raid shelter available. Upon entering the air raid alarm goes off and the space is filled with the sound of sirens and dim red light faintly illuminating the ominous darkness. It also faithfully recreates the impact of an incendiary bomb, an unnerving, if not downright scary experience for children and adults alike. It is an experience that recreates the daily lives of people in the middle of the war, helping us realize the horrors of it.
The air raids are very realistically recreated via projection mapping technology and are bound to become an unforgettable experience. On Saturdays there are also special video projections so we recommend timing your visit accordingly.
With an extensive collection of everyday items like clothes, foods and even store signs you gain a glimpse into the daily lives of the people of Osaka. For a detailed explanation be sure to touch the interactive panel placed on top of the replica of an elementary school desk.
The recreations of meals on display will give you a better understanding of the scarcity of food during wartime.

Workshops and the museum shop

The center offers more than just the exhibits, as there are various workshops, events and even a festival held here periodically. Furthermore, there are special theatrical performances available for the younger audience.
The institution also offers travelling exhibitions especially for academic institutions and puts great efforts into educating the younger generations about the importance and value of peace.
It is also possible to donate the “senbazuru” thousand paper crane strands. This ancient custom has a long history and in traditional Japanese folklore it is believed that successfully folding 1000 paper cranes makes ones wish come true, however the custom gained popularity and attention in the west due to Sadako Sasaki, a young girl who became a victim of the Hiroshima nuclear bombing.
Even though the facility is primarily geared toward children, it does host events that are more aimed at the adult visitors. There are often concerts held here, as well as movie performances on the weekend.
The museum shop offers a wide range of original goods and souvenirs, but also a resting space with vending machines for a small break. Outside you can find the Toki-no-Niwa monument, dedicated to the victims of the aerial bombardment of Osaka. The 8 bells each represent one of the 8 major firebombing air raids inflicted upon Osaka in 1945. The walls are decorated with 15000 colorful tiles, each inscribed with a wish for global peace.
For a more in-depth experience the facility also offers 3 different walking courses focused on the surrounding area of the Osaka Castle and the ruins of the military facilities. The maps can be downloaded and printed from the official website and do not require any fees nor prior registration. 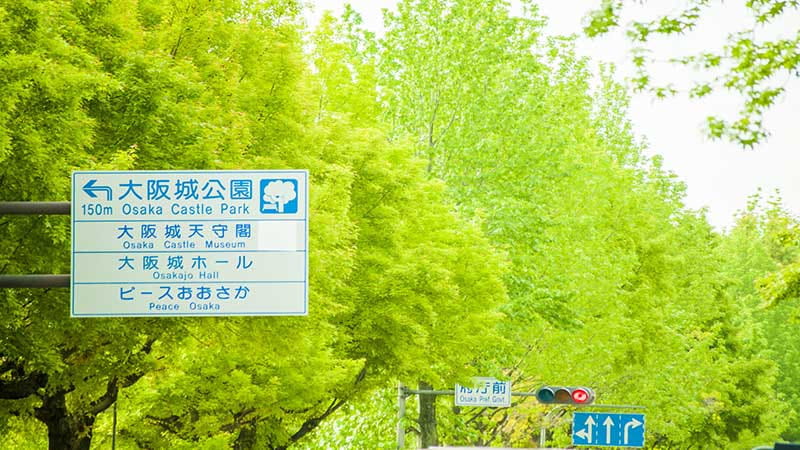 Osaka International Peace Center is located in the Osaka Castle Park, along with the Osaka Castle, Osaka Castle Hall, castle gardens and the Hokoku shrine.
The total surface area of the park is approximately 1.056 square kilometers (105.6ha). Not only can you visit the castle built and owned by the famous imperial regent Toyotomi Hideyoshi, you can also enjoy a cruise of the castle moats on board a gilded cruise boat Gozabune. The western castle garden is famous for the 300 cherry blossom trees growing here and attracts large crowds in the blooming season. However the plum season starts before the cherry season and with 1270 plum trees is truly a sight to behold and a great spot to visit outside of the peak tourist seasons.
At the Osaka Castle Hall there are various events held periodically, including most of the major concerts and performances. The Hokoku shrine just south from the main entrance into the inner castle circle venerates Toyotomi Hideyoshi, who is also hailed as the patron of getting ahead and success in life. History buffs will enjoy the imprinted stone area, where you can see the stones engraved with the seals and symbols of the feudal lords who provided them and contributed to the castle construction. Boarding points for the Osaka Aqualiner are also nearby, offering a chance to cruise around and through popular destinations like the Dotonbori street and Shinsaibashi, Midosuji and more. The cruises focus on the area of downtown Osaka, O River and Dojima River respectively. As you cruise around the popular Dotonbori and Shinsaibashi, you can also catch a glimpse of the iconic Glico Running Man board, “eat-until-you-drop” Kuidaore-Taro, or the animatronic sculptures above the famous shops like Kani Doraku. 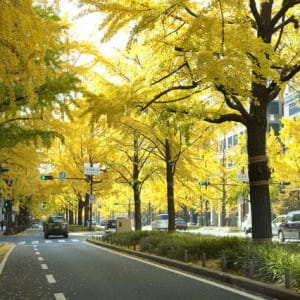